We offer you an excursion to the national parks, excursions to historical places of our region.

Sairam-Ugamy is State National park.The territory to Sauries-Ugamsky of the state national natural park occupies northeast position in system of Western Tjan-Shanja and is presented by hills of Ugam, Karzhantau and Boraldazhtau, and also northwest spurs of Talassky Ala Tau. In park territory Sairamsu, Kaskasu, Burguljuk, to Buds, Mashat and Kokbulak proceeds the rivers Ugam. The park territory has 7 natural zones, beginning mountain steppe to high mountain where there are 1635 kinds of plants, 59 kinds of mammals and 300 kinds of birds. The specific structure of vegetation of park is unique. 240 kinds of the plants brought in the red book of Republic Kazakhstan Here grow. It is especially possible to underline that practically all It is red the book kinds concern the rare. Very much rare species – Fraxinus, wild grapes, Janchevsky's curran, Albert's iris – are presented only by several copies. The most remarkable feature of Western Tjan-Shanja also is distribution here many kinds of wild relatives of cultural plants - of an apple-tree, a pear, plum, grapes, a nuts, an onions and a tulip. The park fauna is various also. Bears, wolves, wild boars, mountain goats, badgers and porcupines - usual inhabitants of park. 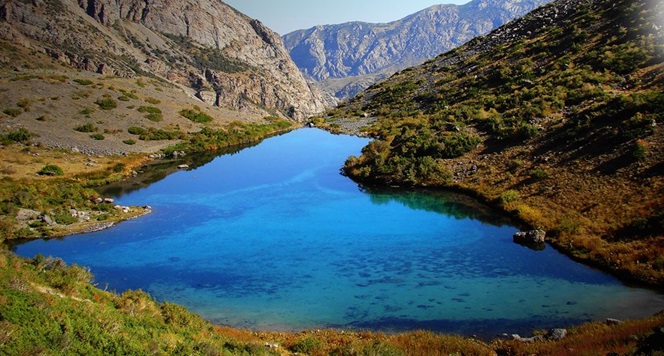 The main wealth of Sairam-su is a lake of glacial origin. Interestingly, the color of the lake is clearly demarcated on transparency, but the blue and turquoise. On this occasion, there is a beautiful legend. The head of the tribe of the local people had a daughter which matchmakered with a rich khan. The girl grew up and fell in love with an ordinary shepherd, but his father didn't give a consest . The boy and the girl decided to flee. Blessed by the only young grandmother and gave as a gift the bride a turquoise ring and bracelet snake. Fleeing from the chase, she threw the ground turquoise ring - formed at this place the lake water hue amazing malachite. On the place where was fallen the bracelet, the lake was formed in the shape of eight, symbolizing infinity. For many years turquoise water (women) and transparent blue (boys)merged now. Not to spill lake into two halves, so eternally soul of lovers are infinity, which gave rise to this lake.

Sauran (X century BC) was a powerful fortress. The special design and independent power, the city was able to withstand a few months long siege. People continue to live in the castle until the middle of XVII century.

Sauran (X century BC) was a powerful fortress. The special design and independent power, the city was able to withstand a few months long siege. People continue to live in the castle until the midd ...