The central city on the Silk Road

Sayram (Ispidjab VI-XVIII cc.) was a large well-populated city on the ancient caravan route from Shasha (Tashkent) to Shymkent. In Suan-Tsyan’s book (629AD) Sayram was mentioned as “The city on the white river”. Sayram is outstandingly abundant in mazars (holly graves).

The etymology of the place name Ispidzhab meaning "white water" offered by researchers from the Sogdian language. City called Sairam lived up to the present time and there is no doubt that the settlement on its territory corresponds to the medieval Ispidzhab. Sairam Mound dates from I - XIX centuries BC It is included as one of the priorities of the historical and archaeological sites in the state program "Cultural Heritage". There are overabundance mazar (saints' tombs). The following shrines still exist: the parents of the outstanding poet and mystic religious X. A. Yassavi Karashash Ana (XVIII c.), Ibrahim Ata (XIII-XIX centuries), Abdel Aziz Baba (XV-XIX centuries) Hodge Taliga (XIII-XIX centuries), Mirali Baba (the end of the nineteenth and twentieth centuries), medieval minaret Hyzr (XIII-XIX centuries) 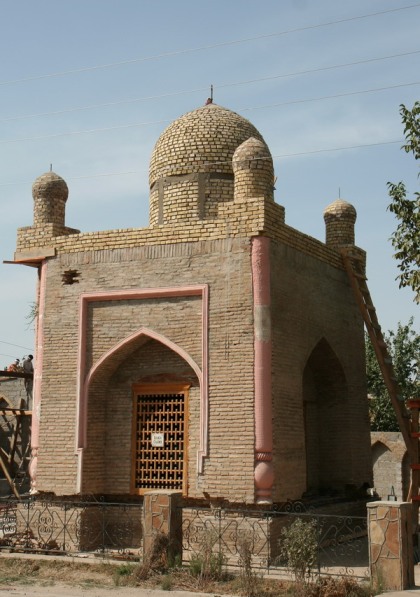 Ispidzhab (Sairam) -is witness the long and rich historyhistory of the the famous trade route channel that linked East and West - the Great Silk Road. Once Ispidzhab was one of the key points of the Silk Road trade in the Southern Kazakhstan. According to the Arab chronicler, located in the city markets where traded fabrics, covered shopping arcades of the mosque. Despite the brisk trade Ispidzhab, according to the ancient historian, left a good impression of clean and cozy town.

Unfortunately, time has played a cruel joke with Ispidzhab. Already in the 17th century, the city has completely lost its significance as an important trade center. Today Ispidzhab turned into a village, and is called Sairam. Nevertheless, Kazakhstan can be proud of the fact that on its territory there is this wonderful monument of medieval Asian prosperity. Pride, however, is overshadowed by the fact that most of the architectural period of the Silk Road fell into disrepair. However, the few buildings which miraculously survived to the present day, which deserve close attention.

Turkestan (Yassy) was known as a spiritual and political center of the Turkic people and the oldest capital of the Kazakh khans. Pilgrims say three trips to Turkestan as well as a small pilgrimage to Mecca.

Turkestan (Yassy) was known as a spiritual and political center of the Turkic people and the oldest capital of the Kazakh khans. Pilgrims say three trips to Turkesta ...

low chart of the tourist route